An Illinois woman was charged with DUI after police found a 15-foot tree stuck in the front grill of her car.

Photos posted to the Roselle Police Department Facebook page show what officers found during a DUI stop back in January. The car apparently struck a tree —but the driver kept driving.

On Monday, police released dash cam video of the arrest. The driver admitted to police that she hit the tree “somewhere in Schaumburg” but kept driving.

“Yet another reason why you should not drink and drive!” the police department wrote on Facebook. 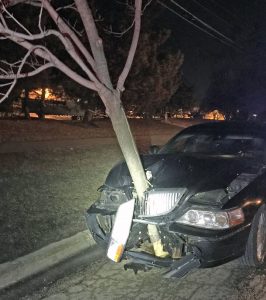