The body of a fisherman who fell off his boat into Lake Michigan was located Friday morning by search crews.

Efforts were underway to recover the body of Donald Walter Schiele, 65, of Rockford, according to a press release issued by the Muskegon County Sheriff’s Office at 10 a.m. May 12.

The body was found in 15 feet of water near to where Schiele’s boat was recovered, the release stated.

Witnesses saw Schiele fall off the boat around 11:30 a.m. Wednesday about 300 yards off shore south of the White Lake Channel. Attempts to swim to Schiele were thwarted by cold water, and rescue boats, the U.S Coast Guard helicopter and a dive team were launched to try to rescue him.

The search continued on Wednesday for more than eight hours, covering at least 55 miles and involving dozens of personnel, according to the Coast Guard. The search with side-scan sonar resumed Thursday by the Muskegon County and Ottawa County sheriff’s offices and the Michigan State Police, but ended without success.

The body was located early into the third day of searching. He is presumed to have drowned.

White Lake Fire Authority Chief Greg Holman said that shortly after arriving at Michillinda Lodge  where witnesses heard Schiele yelling for help, he saw the victim who was 300 yards offshore go under water. Holman tried to swim out to the victim, but the water was too cold, he reported.

Schiele’s family said he had left his Rockford home to go fishing about 4:15 a.m. Wednesday, according to Muskegon County Sheriff Michael Poulin. He launched his 16-foot Crestliner at Muskegon’s Cottage Grove launch ramp on Muskegon Lake. 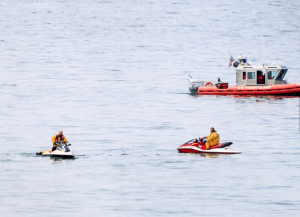