Different members of the Muskegon criminal justice system took part in a panel that discussed what to do when being pulled over by a police officer at Muskegon Community College. 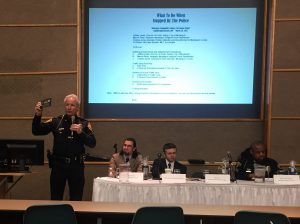 During the event, they presented actual footage of a traffic stop where tensions escalated, and offered advice on how to handle a stop to create the best response from all parties involved.

Many times when officers stop a driver for a traffic violation, they find that many people are not prepared for the procedure.

For a driver, being unprepared means not being able to locate their proof of insurance and registration upon the officer’s request. Because many drivers are nervous during a traffic stop, this leads to tension and frustration being created that could be avoided.

In order to combat this problem, all of those in attendance of the panel discussion were given a sleeve to place those documents in to be prepared in the situation

Because tensions can run high when being pulled over, the panel members each stressed how important it is to remain calm during the situation.

Both police officials gave examples of stops that went from a simple parking ticket to a felony charge due to the citizen’s inability to remain calm, escalating the situation and creating more problems than initially existed.

Ayres also noted how important it was to keep a level head, because it is only possible to get deeper into trouble other than visa versa.

When Lewis and Petty spoke on the topic, they kept referring back to keeping emotions of both parties in check and sticking to the matter at hand, which is the traffic violation that warranted the stop.

While there are cases where officers can be out of line or speak in an unpleasant manner, they pointed to plenty of instances where the situation could be avoided by speaking in a respectful way.

An example Ayres gave was answering questions such as the destination of the driver. While you are not legally required to do so, it is important to tell the officer politely that you don’t wish to answer his or her question. In many instances, it will end the line of questioning and get both parties on their way sooner.

There have been many situations where a person feels as if they were slighted by a police officer or treated unfairly during an interaction.

While some of these complaints may be valid and warrant an investigation of the officer’s actions, it is important to know the time and the place for that, Lewis said.

Lewis said it is important to comply with what the officer is requesting, such as producing a driver’s license or stepping out of the vehicle, and then address complaints once the situation has come to a close.

In the Muskegon Police Department, policies and procedures are in place that officers must follow when performing their duties. When they are found to have gone against those guidelines, the offending officer faces disciplinary actions.