An 18-year-old Rockford man was killed Thursday evening when the vehicle he was driving was involved in a crash in Cannon Township.

Also seriously injured in the collision was a 14-year-old Rockford male, who was transported by ambulance to Helen DeVos Children’s Hospital.

This occurred after 9 p.m. at the intersection of Cannonsburg Road and Egypt Valley Avenue 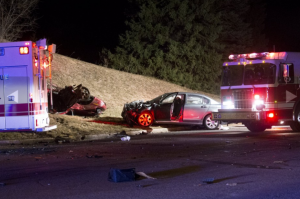 As the he was completing his left turn, he was struck by a Honda Accord traveling eastbound on Cannonsburg. One vehicle was overturned, and both had occupants pinned-in.

The Honda was being driven by a 60-year-old Rockford man, who sustained minor injuries and was transported by ambulance to Spectrum Health.

Alcohol does not appear to be a factor in the crash, and all three occupants involved were wearing seat belts.

Officials are withholding the names of both teens until their school is notified.