SAGINAW, MI — Angela Timmons was sitting inside a Midland County courtroom with about 20 family members Friday, March 4, when sheriff’s deputies led in a wheelchair-bound man who prosecutors say killed her mother nearly 25 years ago.

That man, Michael T. McIntyre, was Timmons’ boyfriend at one time. More than two decades later, he is now charged with murder in the fatal beating of Timmons’ mother, Diane Ross.

As some of Timmons’ family members wept at the sight of McIntyre, Timmons no longer saw a man whom she once dated.

“Just picturing him killing my mother. That’s all I can see when I look at him,” Timmons said after McIntyre faced a judge for arraignment Friday morning.

Ross, 43, died from “massive blunt force trauma injuries” she suffered at the hands of a masked assailant early Aug. 7, 1991, inside her home on North 11 Mile in Lee Township, Midland County Sheriff Scott Stephenson said. McIntyre, one of several initial suspects in the homicide, now is charged with first-degree premeditated murder and first-degree felony murder, charges that carry mandatory penalties of life in prison without the possibility of parole.

Midland County sheriff’s detectives in 2012 took up the investigation of the homicide and collaborated with the Michigan State Police, the FBI and Michigan Attorney General Bill Schuette’s cold case team. Midland County Prosecutor J. Dee Brooks this week issued charges against McIntyre, 51, who most recently was living in Oakland County.

“It does provide some measure of satisfaction after all these years that we are able to bring justice to Diane Ross and to her family and to hold who we believe to be the appropriate party responsible for their actions,” Brooks said.

Timmons, 49, said she is “very pleased” with the filing of the charges.

“I can’t imagine how hard that was to solve that after that many years,” she said.

Michael Fountain, Ross’ grandson and Timmons’ son, was 5 years old and witnessed the homicide, Stephenson said. The sheriff said Fountain ran to a relative’s home to get help for his grandmother, but she never regained consciousness and died.

Fountain attended Friday’s arraignment in Midland County Circuit Judge Stephen Carras’ courtroom. He said he remembers “bits and pieces” of the homicide but did not think the day would come that charges would be filed.

“I was hoping, just for my immediate family … because they’ve suffered more than I have in the long run because they remember it,” he said. “I was closer when I was little, but obviously I was 5. I more hoped that this day would come just to give them solace and comfort.”

Fountain said he did not recognize McIntyre.

“I don’t really recall,” he said. “I’ve known the name … but I never pictured him, I’ve never seen him that I can remember.”

Ross’ sister, Lindy Barton, began to cry when deputies brought McIntyre, who is in a wheelchair because of a stroke he suffered in January, into Carras’ courtroom.

“All these years, he’s been free, and he just destroyed a whole family,” Barton said. “At least I know he’s here, and we finally got our answers.”

Barton also said she did not think the day would come.

“But the last year or so, I’ve had a lot of hope, because they’ve been working very hard,” she said. “And I can’t express enough the gratitude that they dug up this cold case and worked so hard to put an end to this.”

Brooks, who started in the prosecutor’s office earlier in 1991, said that even though investigators in 1991 worked hard on the case, “at least at that time, we were not able to put a provable case together.”

“That’s something that really eats at me, and it’s very difficult to deal with, but you accept it, and you move on, and you do the best you can under the circumstances,” he said. “But that doesn’t mean that you let go. You never want to leave a case unsolved, unresolved, especially one of this nature.”

Detectives were able to obtain physical evidence and located additional witnesses, Stephenson said. Brooks declined to comment on a possible motive, noting McIntyre’s pending preliminary hearing, where the prosecution must prove probable cause to take him to trial.

In addition to many of Ross’ family members, numerous police and prosecution officials attended Friday’s arraignment.

“This was a great collaboration of agencies that worked in conjunction with each other to make our communities safer,” Stephenson said.

Schuette, who attended the hearing, added that the case “truly shows the significance and importance of never, never closing a cold case.”

“After 25 years, it would have been easy for (those involved in the investigation) to walk away,” Schuette said. “And we would have never found out who murdered this loved mother, grandmother, and member of our community. And then justice would have never been delivered or obtained. But that’s not the way we do it.” 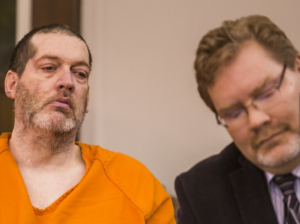