An armed robbery of a north side gas station Monday was not a random act, police said Tuesday. 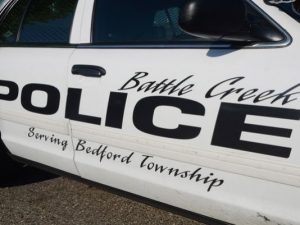 “This does appear to be connected to the store,” Detective Sgt. Troy Gilleylen said Tuesday morning. “We are working on leads and looking at the possibility of a grudge.”

A 25-year-old clerk was struck in the head with a hammer during an apparent robbery reported at 3:36 a.m. Monday at the Citgo station at 424 Capital Ave. N.E. The 25-year-old clerk said a man dressed in black with a scarf wrapped around his head entered the store and began spilling coffee and yelled at the clerk to clean the mess.

Then the man attacked the clerk with a hammer, striking him several times in the head. The clerk was able to escape and motioned to a passing City Cab driver for help. The suspect was able to take some money from the cash register, Gilleylen said, and then apparently fled through a rear door before police arrived.

Officers recovered the hammer. The clerk was taken to Bronson Battle Creek where he was treated and released. Gilleylen said officers have a possible suspect and are searching for the man, but said he is not likely connected to any other crimes in the area.