Ishmail James Autman, the only person charged with homicide in the shooting death of a woman driving a minivan in Muskegon Heights last summer, has pleaded no contest to manslaughter and other charges.

Autman, 24, was never accused of shooting Peggy Sue Everett. Everett was the 36-year-old Oakridge schoolbus driver who died after she was shot in the head just after 6 p.m. June 30 at the wheel of her minivan on Eighth Street near Columbia Avenue. 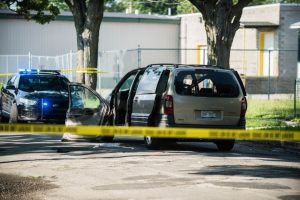 Instead, Autman – a passenger in Everett’s van – was charged with open murder and other counts on Muskegon County Prosecutor D.J. Hilson’s theory that Autman was the “catalyst” of her death by launching the gunfight that killed her.

Autman pleaded no contest Dec. 18 to manslaughter, carrying a concealed weapon and a felony firearm count, according to his attorney, David Kortering. In exchange for his plea, prosecutors dismissed charges of open murder and discharging a firearm from a vehicle causing death, as well as a second felony firearm count.

A no-contest plea is not an admission of guilt but results in conviction and is treated as a guilty plea at sentencing.

Autman likely faces a minimum prison sentence of seven years and a maximum of 17 years when he’s sentenced Jan. 26.

Muskegon County Chief Circuit Judge William C. Marietti committed to cap Autman’s minimum on the manslaughter conviction at five years, with a consecutive sentence of two years for the felony firearm count, Kortering said. The maximum sentence for manslaughter is 15 years in prison.

Prosecutors said Everett drove Autman and two other young men to the Eighth Street location. According to an affidavit for Autman’s warrantless arrest, text messages between Autman and Everett showed a plan to commit armed robbery in Muskegon Heights.

According to testimony by another minivan passenger at Autman’s preliminary hearing Aug. 31, Autman fired a handgun approximately three times straight up into the air from the front passenger window after the minivan rolled by a group of teens walking on the street. None of the teens on the street had done anything to provoke the shots, the witness testified.

Two of the teens then fired at the minivan. One of the return bullets went through the minivan’s back window and struck Everett in the back of the head, mortally wounding her.

The teens who allegedly fired at the van were charged with felonies but not with homicide or any other assaultive crime.

Martel DeShawn Love, 17, was charged as an adult with carrying a concealed weapon and tampering with evidence, for allegedly ditching his gun, which police never found. He’s scheduled for trial Feb. 3.

James McBride, who recently turned 17 but was 16 at the time of the shooting, was charged as a juvenile with the same felonies. On Oct. 16 he pleaded guilty to evidence tampering, and the concealed-weapon count was dismissed. McBride is incarcerated at the Muskegon County Juvenile Transition Center.