Authorities say a mentally distressed former Marine who was armed with a fake gun attempted a “suicide by cop” during a nearly three-hour standoff with police at the Orlando International Airport before peacefully surrendering.

No one was hurt and no shots were ever fired, but the Tuesday night standoff caused confusion and anxiety among travelers. Part of the airport was evacuated as hundreds of officers stormed the area, some with their guns drawn.

Authorities say 26-year-old Michael Wayne Pettigrew was in “mental distress” when police surrounded him at the rental car area of the airport. He pointed what looked like a real gun at officers and himself.

Pettigrew was being held for a mental evaluation and faces aggravated assault charges. 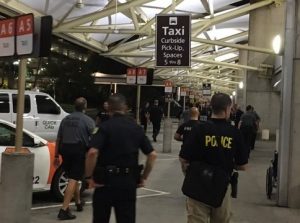