Hundreds of people were evacuated from a downtown high-rise on New Year’s morning because of the possibility of a fire.

It happened just after 3 a.m. at Plaza Towers, which houses apartments and condominiums and is attached to the Courtyard by Marriott.

Mia Dubois said she and her friends were visiting from metro Detroit. “The worst part was after such a fun night of dinner and drinking and seeing the ball drop, we were in our pajamas and we heard this alarm going off. They told us to evacuate. It was a shocker.” 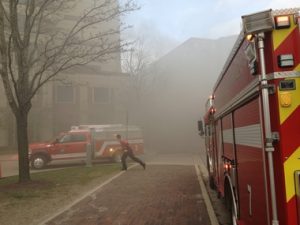 Eenhoorn, the company that manages the property, says someone pulled two alarms on the 13th floor of the apartments. Shortly after that, someone says they saw smoke. Protocol states that the 32-story building must be evacuated.

“I think they did the best they could,” said Matt Koziara, who was staying at the hotel. 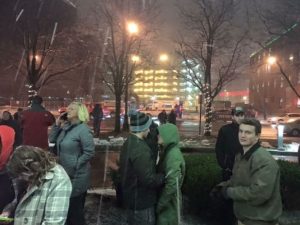 Hundreds of guests and residents were sent outside.

“We were freezing. They were giving people blankets, the fire department was. It was so cold,” said DuBois.

The Grand Rapids Fire Department never found any sign of smoke or a fire. After about an hour, residents and guests were allowed back in their rooms.
DuBois says the hotel allowed them to check out late and gave them complimentary coffee and tea.

The building’s management says it is trying to figure out who pulled the alarms.