A Southern California grandmother accused of a stabbing attack that killed a 1-year-old girl and wounded two other relatives is now in custody after a search that stretched on for hours, police announced Tuesday.

After the attack, Darrington-Clark bolted from the apartment she shared with the victims, according to investigators. Neighbors who responded to the mother’s screaming pleas found the grisly scene and wounded children in the apartment.

Neighbor, Tim Hill said the children’s mother was “bloodied and hysterical” after the attack. “Her mother is coming down toward my apartment with a knife still in her hand… bloody knife… blood on her shirt.”

In 2005, she pleaded guilty to stabbing her 14-year-old son and throwing her 10-year-old daughter out of a moving minivan. Neither child was seriously injured.

But a judge found Darrington-Clark not guilty by reason of insanity and sent her to a mental hospital. 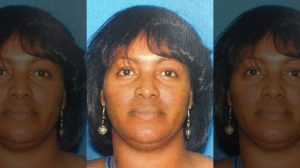