Police say six people were injured in a head-on collision between a Kalamazoo Metro Transit bus and a car, with both drivers initially trapped.

Police say speed is believed a factor in the crash at Oakland Drive and South Street.

The car pierced the front of the bus and pinned the bus driver, Kalamazoo Public Safety officers said.

Police said the bus driver had the right-of-way and was not at fault in the crash.

Rescuers and police responded to the crash at 7:22 p.m. Wednesday, May 24, and the first arriving officer helped get passengers off the bus.

The bus was transporting six people and four were taken to Bronson Methodist Hospital for injuries not considered life-threatening.

Rescuers used extrication tools to free both drivers. They were described as initially unresponsive.

Both drivers were in surgery at about 9 p.m. Wednesday, police said, and their conditions were not known.

Police did not indicate which direction the vehicles were going when the crash happened, but said speed was likely a factor in the collision. 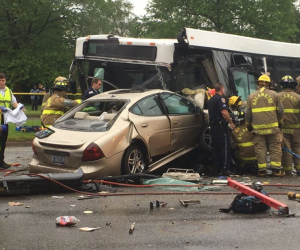