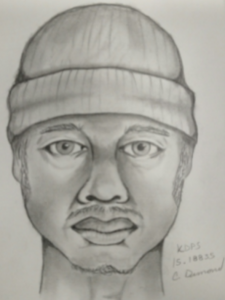 KALAMAZOO, Mich.
A 20-year-old man is in critical condition after being shot multiple times.

The victim suffered several gunshot wounds around 2 p.m. Friday in the 2700 block of Westbrook Avenue, according to a Kalamazoo Department of Public Safety news release. Police say he called police to report his injuries.
The man, whose name has not been released, was shot by an unknown suspect inside his apartment and was taken to Bronson Hospital for surgery.

The suspect still is at large, police say. They were able to compose a composite sketch of the suspect.
He is described as an African American man with light complexion. He is about 5’9″ tall and 160lbs. He is described as being approximately 20-28 years old, wearing a white thermal long sleeve shirt, black jeans and a gray stocking cap. He also has a mustache and goatee.