He is charged with second-degree murder in the deaths of his passenger, David Torrez, a 15-year-old cousin, and Tara Oskam, a 21-year-old junior at Calvin College.

He was fleeing state police on 52nd Street SE when his vehicle slammed broadside into Oskam’s car on Broadmoor Avenue, police say. His vehicle was going at least 100 mph when it struck Oskam’s vehicle, according to police estimates.

He drove through a flashing red light, police said. Oskam had a flashing yellow. Police say he had been yielding at other intersections before the collision.

A state police trooper tried to stop the suspect on U.S. 131 for going 90 mph. The driver got off at the 54th Street exit. 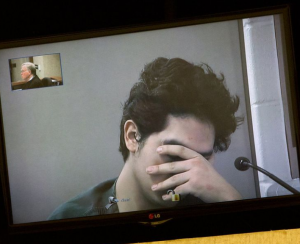