Authorities say a poker player who grabbed cash and fled from a Michigan casino was arrested after a freeway chase that reached speeds of nearly 100 mph.

The man was arrested Thursday night in Berrien County in southwestern Michigan following the theft earlier in the night at FireKeepers Casino near Battle Creek. Tribal police from the Nottawaseppi Huron Band of the Potawatomi pursued him onto eastbound Interstate 94.

Authorities say the man used an emergency turnaround to get into the westbound lanes and officers lost sight of him. Officers in Kalamazoo and Van Buren counties also tried to stop the car before it was stopped by Michigan State Police in Berrien County.

No injuries were reported. The Nottawaseppi Huron Band operates the casino. 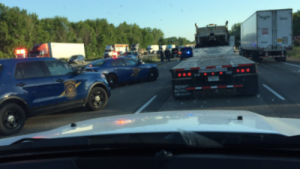