Police are investigating a fatal crash in which a male passenger was killed and the driver fled Wednesday evening at the border of Grand Rapids and Wyoming.

The incident occurred around 11:05 p.m. at the intersection of Division Avenue and Alger Street, near the Log Cabin bar.

Police determined an SUV was traveling north on Division approaching the Alger intersection when it struck the median. The vehicle went airborne before striking a utility pole on the west side of Division, causing the pole to snap and land on the passenger side of the vehicle.

A 28-year-old man, who was riding in the passenger seat, was killed in the crash.

The driver, described by police as a white man in his 20s, fled the scene on foot. He is described as being between 5-foot-8 and 5-foot-10 with short hair and a beard. He was last seen wearing a pink shirt and khaki shorts.

Speed appears to be a factor in the crash, police said. The incident remains under investigation.

The name of the deceased man is being withheld while family is notified.

A handful of Consumers Energy customers remain without power as of 7:20 a.m. Thursday. 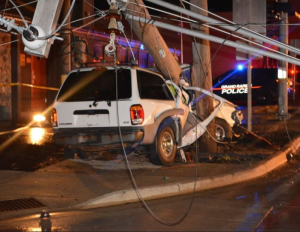