The city of Grand Rapids installed special fencing on the top of its parking garages three years ago to help prevent suicides or falls. The move came after three people had died.

Since the fencing was installed in 2014, the city has had one death associated with someone jumping from one of the city’s seven parking structures. That death occurred in April.

In Grand Rapids, fencing installation started in the fall of 2014 after a woman jumped from a structure and died in 2009, another man died by suicide in 2012 after jumping off a ramp and a man died from an accidental fall in 2014.

The city put a 4-foot-tall, steel fence on top of a 4-foot cement wall on the structures. The fencing is curved inward to make it difficult for climbing.

While the fencing was more expensive than an option like chain-link, it’s aesthetically pleasing and fits the look of the city, he said.

The project was about $238,000, per an International Parking Institute report on the fencing that cited the Grand Rapids project.

The city also installed cameras in strategic locations to monitor activity on parking roofs, and staff routinely patrol the garages to check for any suspicious activity, he said.

The system isn’t perfect. On April 22, a woman jumped from a structure at Monroe Avenue NW and Campau Avenue and died, according to police. Naramore said the city by policy does not comment on suicides.

And Grand Rapids’ efforts to improve parking-structure safety does not affect garages that aren’t operated by the city.

In January, a person was injured in what police say was a likely suicide attempt at a Grand Rapids Community College parking garage in the city. It had no fencing.

A 34-year-old woman died March 18 after Grand Rapids police said she jumped from a Spectrum Health parking ramp, a structure that has low railings. 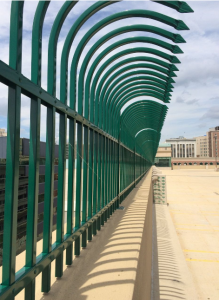