Police are investigating the attempted robbery of a Grand Rapids Taco Bell restaurant in which the suspect escaped with no money.

Officers from the Grand Rapids Police Department were dispatched around 7:15 a.m. Wednesday, May 3 to the eatery at 605 Leonard Street NW.

Preliminary investigation determined a white man in his 40s entered the store, implied he had a gun and demanded money before fleeing on foot, police said.

The suspect was last seen fleeing north, wearing a purple and gray jacket.

Police are investigating the incident as an attempted armed robbery, despite the man leaving with nothing, because he implied he had a gun and intended to rob the restaurant.

No arrests have been made and the incident remains under investigation. Anyone with additional information is asked to contact the police department at 616-456-4683, or Silent Observer at 616-774-2345. 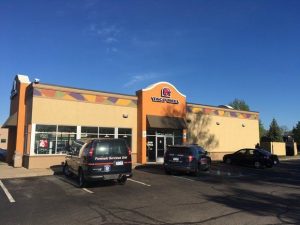