Mothers of five unarmed African American boys stopped at gunpoint by police were almost too emotional for words as they stood before the Grand Rapids City Commission Tuesday night.

More than 300 people packed themselves into the city commission Tuesday night, many sitting on the floor, blocking aisle ways, and standing along the edges of the room for more than an hour as they waited for the public comment portion at the end of the meeting.

Many wore blue stickers that said “#wouldyoupullagunonme” passed out by several community groups.

During the two hours of public comment, there were calls for more training for officers, testing on officer bias and better accountability on the 12-point-plan the department adopted to address race relations.

But more prominently, black and Hispanic Grand Rapids residents who took the microphone shared that they feel treated differently – and more discriminated against – by the GRPD than their Caucasian friends and relatives.

Javonte Tubbs said he was 16 years old and coming home from playing basketball during the summer of 1991 — when he fit the description of a black suspect who had robbed a bank. Things haven’t changed, Tubbs said.

Tubbs said what the police did to the black teens fit the definition of “molestation” — a crime that otherwise would have brought a 25 year prison sentence.

Bromesa Sims is father to two of the boys involved in the incident who are ages 12 and 14.

“I’ve lived this for 38 years,” Bromesa Sims said. “I’m angry – and I know a lot of people are angry. And we’re not going to take too much more of this – and I’m saying this to the police. Like, something has to change before you have a situation on your hands that you can’t handle.”

Chief David Rahinsky met with the parents and the boys involved two weeks ago, and apologized to them for the situation on behalf of the department. The parents requested that the officers apologize directly to the boys – a request Rahinsky doesn’t think is appropriate.

The officers acted courteously and according to protocol, based on the information they had – something that doesn’t warrant an apology, Rahinsky said.

“The officers didn’t do anything wrong. They acted on articulate facts from a witness moments earlier who said he saw them hand a gun to each other,” Rahinsky said. “I think when the community sees what we’ve seen – with the body worn camera footage; I think they’ll have a different opinion. I respect their emotion. I think what we’re hearing is a lot of grief and frustration to systemic issues.”

Nearly everyone who spoke backed the mothers’ requests for apologies from the officers involved to the boys, and called for the Grand Rapids Police Department to change its protocols. 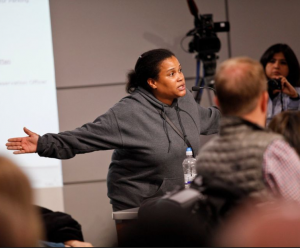