The study shows black motorists are twice as likely to be stopped by police within the city limits as non-black drivers.

“The findings are very disappointing,” reiterated City Manager Greg Sundstrom. “This must end. It is contrary to values held by this community. They do not reflect the priorities of this city.”

Sundstrom said on Wednesday, April 19, the city is committed to putting the results of the study in front of “as many people as possible” and vowed city leaders are “committed to addressing bias in policing.”

On April 18th, the city and police department held two public meetings detailing the results of the study and fielding questions from both black and white citizens.

Three more meetings were held Wednesday night, one in the city’s southeast quadrant and two closer to the city center.

Here are five questions raised during the second day of public discussion on police bias in Grand Rapids:

1. Does the police department have access to data indicating which officers were more prone to racial bias and is there a plan for potential punishment?

“Were not looking to be punitive,” Police Chief David Rahinsky said. “We want to address this by training. If we all undergo the same training, I’d like to see us all improve as a group. Maybe at some point as we look forward.”

Sundstrom reminded citizens the city views the findings of the study as much more complicated than the individual bias of a few “bad apples.”

“The study didn’t show a few people here and there,” he said.  “It’s a systemic problem. We are going to address it that way. Once we think we have fixed the problem, then we can address individuals.”

2. Where does Grand Rapids fall in terms of national comparison when it comes to policing bias?

“I think the cities that need this the most don’t undertake this,” Rahinksy said. “The fact that we were self-selecting in this process is telling.”

The data analyzation was performed by Lamberth Consulting Inc., headed by John Lamberth.

“Grand Rapids was not the worst that we’ve seen,” Lamberth said. “Kalamazoo was about the same. Grand Rapids falls in the lower third (they’ve studied). It’s a serious problem but not one that can’t be overcome.”

3. Does the police department have a strategy to bring community together, as dictated by (Lamberth’s) recommendations for eliminating disparities?

“I share your concern,” Rahinsky said. “There isn’t a neighborhood out there that does not have some GRPD officer coming into contact with people there. We have other groups as well to get the information out. I want to mention I’ll be holding open office hours this coming Friday (April 21) from 9 a.m. to 3 p.m. No appointment needed. I just want to hear from anyone that has a concern on this topic.”

Rahinsky said the department will validate parking for citizens wishing to take advantage of his open office hours that day.

4. What happens after the training? What are the next steps?

“At the next city commission meeting we are going to be looking to fund a 2016 study,” Sundstrom said. “We are going to use the 2016 data as our roadmap for (what comes next).”

Sundstrom alluded to recent public outcry in the city following an incident late last month when five black and unarmed children were stopped at gunpoint by city police.

“Recent events in the city have caused us to think about how we want to police,” he said. “It’s important that the community defines how we are going to police.”

5. What factors led to timing when it came to the releasing of this study to the public?

“In the old days, we might have sat on this and found a nice way to spin this,” Sundstrom said. “We thought (the results were) going to be better. It is what it is and we are going to hit it face on.

“There is no hiding from this.” 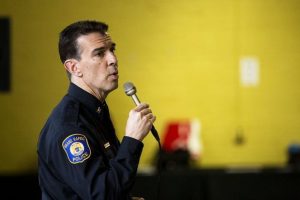