Three Grand Rapids Police officers are on a paid administrative leave for their involvement in the officer-involved shooting that killed an 18-year-old Grand Rapids man.

Police said the three officers were placed on leave pending a Michigan State Police investigation, as is protocol following an officer-involved shooting.

The department declined to comment on specific details in the case until after state police conclude their investigation.

The incident occurred around 12:30 p.m. May 3 in the 1300 block of Dickinson Street SE. Police were attempting to take Malik Carey into custody because he was a probation absconder, when they said he opened fired on them.

Soon after the shooting, police requested backup be dispatched to the area. Three officers involved in the firefight were quickly replaced at the scene and directed to paramedics for evaluation.

No officer was shot during the incident.

It’s unclear how many of the officers fired their weapons toward Carey, but Rahinsky said the department can place all officers involved in a shooting on leave — even if they didn’t fire their weapon — due to the traumatic nature of the situation.

Grand Rapids Police is conducting its own internal investigation as well to ensure compliance with policy and procedure.

Attempts to reach the Michigan State Police investigators handling the case have been unsuccessful. 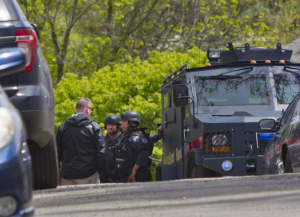