CALL US TOLL FREE888-203-4841
Malik Carey, the 18-year-old shot by police after he fired at officers, has died at St. Mary’s Hospital, a relative said.
Police also confirmed about 5:30 p.m. Wednesday, May 3, that he had died.
Carey was shot after police say he fired upon them in the 1300 block of Dickinson Street SE in early afternoon.
Police initially responded to the area about 12:30 p.m. and made contact with Carey because he was a probation absconder. Police said he would not follow their commands and eventually pulled out a gun.
Carey fell to the ground after being shot.

Police said it was a period of time before they could safely approach Carey because he would not move his hands from below his body, Grand Rapids police Sgt. Terry Dixon said. He could not give an exact time, although some witnesses said it was minutes.

Dixon said Carey initially was talking with officers after he was wounded.

When police were able to reach Carey, a gun was reportedly found underneath him. 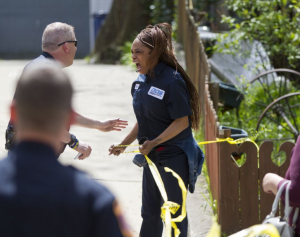