One male was fatally shot and another seriously injured in an altercation that followed what police called a road rage incident in Sparta Township.

The incident occurred around 3:30 a.m. Monday, May 22 in the parking lot of Sparta Chevrolet.

Occupants of two vehicles involved in the road rage situation pulled over into the lot, where a physical altercation ensued, according to Kent County Undersheriff Michelle LaJoye-Young.

LaJoye-Young said one of the male shooting victims was fatally wounded, and the other was seriously injured. He was taken to a local hospital, where he’s being treated for his wounds.

The shooter, who police said was legally carrying his weapon, was also injured. He contacted police and remained on scene.

Detectives are questioning both the male shooter and female driver, and LaJoye-Young said both are cooperating.

Police have not released any names or ages of the individuals involved at this time.

M-37 was closed between 10 and 12 Mile Road until about 7 a.m. when deputies cleared the scene. 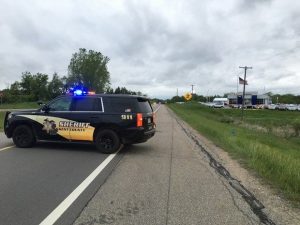