At least one person is dead following a shooting near an Allegan County antiques store, sources say.

Michigan State Police confirmed a suspect had been detained following the shooting, which happened in the 1100 block of Blue Star Highway in Douglas around 7:15 a.m. Wednesday.

MSP taped off The Farmhouse Glenn Antiques and an adjacent house. The investigation appeared to be centered behind the home.

Troopers at the scene said the shooting involved a man and his stepson. The MSP Wayland post said early on it looked like it would be a “serious situation.”

It’s unclear what led up to the gunfire.

MSP said it would release further information after contacting all relatives of those involved in the shooting. 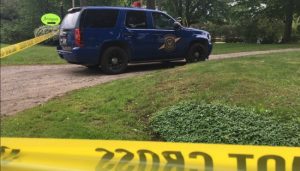