Two pedestrians were reported seriously hurt when a telephone pole fell on top of them as they walked alongside Whitehall Road Tuesday.

Neighbors said a tree branch came down on line attached to a pole, causing the pole to snap. A street light was attached to the pole that landed on two women who were walking down the road.

Five utility poles reportedly were damaged in the incident that occurred around 3:30 p.m. Tuesday on Whitehall Road near River Road.

Four poles that were broken, including the one to which the street light was attached, belonged to Frontier Communications and the fifth belonged to Consumers Energy, 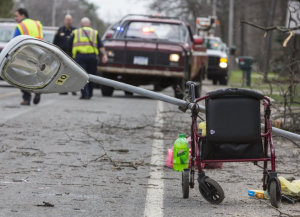