A duo that was convicted of armed robbery in downtown Muskegon will do prison time for their crimes.

William C. Marietti of Muskegon County’s 14th Circuit Court sentenced Pollard to 7-20 years in prison for two counts of armed robbery. Pollard earlier had pleaded no contest to the charges.

Pollard’s co-defendant, Amariea “Amarica” Martin, also 18, was sentenced in early February after pleading guilty to both armed robbery charges. Martin was sentenced by Marietti to 5-20 years in prison.

Martin is currently lodged in the Thumb Correctional Facility, a prison exclusively for younger offenders.Pollard is lodged in the Muskegon County Jail where he’s listed as “sentenced to prison,” according to the jail website.

The prosecutor’s office said earlier that Pollard faced possibly a longer stretch in prison under sentencing guidelines that judges consider, because of prior offenses on his juvenile record. Martin didn’t have a juvenile record in Michigan.

Pollard and Martin were charged with robbing two people the night of October 20, 2016, in Muskegon. The first robbery in the 1300 block of Arthur Street – at 8:35 p.m. a victim reported two men approached him, and one pulled a gray revolver from his waistband. The victim had only cigarettes, which the two took.

The second victim said he was at first approached by two men at the corner of Fourth Street and Clay Avenue in downtown Muskegon.  The two asked him for a light, according to the prosecutor’s office. Later, when he entered the parking lot at the intersection, the two men tackled him and struck him repeatedly. The victim said he fought back and once grabbed a metal object with a cylinder. The attackers stole $8 and headphones from the second victim. 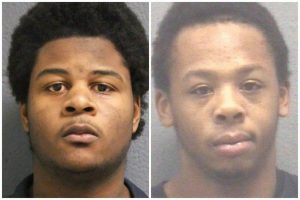