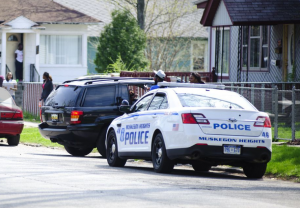 One man was shot during a daylight shoot-out on Seventh Street in Muskegon Heights Wednesday afternoon.

Witnesses said 15 to 20 shots were exchanged between at least two subjects, and possibly more, in the area of Seventh and Columbia Avenue.

One man was shot in the stomach and was taken from the scene by ambulance. He was conscious, breathing normally and talking

One suspect was in custody later in the afternoon

The victim, who did not suffer life-threatening wounds, was not being cooperative with authorities.

The shooting occurred just after 3 p.m. April 26 as the temperatures were climbing above 70 degrees and school children were being dismissed for the day. Curious onlookers milled about as police canvassed the neighborhood for witnesses.

The intersection of Columbia and Seventh was blocked off. Police marked evidence in the middle of the street in the 2800 block of Seventh, north of where the victim was found.

“It sounded like firecrackers,” said one woman who declined to give her name. “I told the kids ‘We’ve got to get in the house.’

“I live in this neighborhood. I hate this mess. I hate it,” she said.

Residents said the sound of gunfire in the area is common.