Two Muskegon teens are headed toward trials in Circuit Court for their roles in an accidental May 2 shooting death.

Davion Hewlett died from a shooting in a car in the parking lot of the Northway Bowling Center, 1751 Evanston Ave, in Muskegon Township.

The two co-defendants charged in the case are the victim’s brother, Dareese Hewlett, and Antwan Lashawn Crawford, both 18.

Both men recently waived preliminary examinations, sending the cases to be tried in Circuit Court.

On May 12, Hewlett waived a preliminary exam for his charges of homicide involuntary manslaughter, carrying a concealed weapon, and resisting/obstructing a police officer.

On May 17, Crawford also waived a preliminary exam for his charges, which are receiving and concealing a stolen firearm, carrying a concealed weapon, and tampering with evidence. Crawford did so reserving the right to have the charges remanded back to district court in the event the charges are not resolved in circuit court.

Neither Hewlett nor Crawford are listed as lodged in Muskegon County Jail.

Crawford, who allegedly hid the stolen gun he was accused of having, appeared calm in court Monday, wearing bright-colored dress clothes and at one point taking some extra time to talk to his attorney. 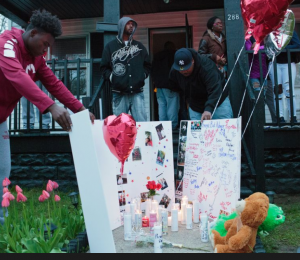