Some Whitehall elementary school students got home safely Thursday afternoon despite their school bus being involved in a crash.

Children were seen evacuating the school bus at around 4:20 p.m. The children were transferred from the damaged school bus to two other Whitehall school buses to complete their ride home.

Whitehall Public Schools Superintendent Jerry McDowell said the bus was coming from the elementary school when the crash occurred.

A Whitehall school bus and a grey Chevrolet Lumina were involved in the crash. According to a witness, the Lumina caught fire after the crash. The incident occurred at the intersection of Orshal Road and Duck Lake Road.

The two passengers of the Lumina were transported to Mercy Health Muskegon’s Hackley Campus, according to the Muskegon County Sheriff’s Office.

The driver and the passenger of the vehicle did not sustain life-threatening injuries, according to the Sheriff’s Office.

The Sheriff’s Office would not comment at this time about the cause or Brady’s account of what allegedly caused the crash.

The car caught fire upon impact with the bus. He said the driver was a woman and the passenger was a man. The woman was pinned in the vehicle, while the male passenger was able to escape, he added.

About six people came to the aid of the driver and used a fire extinguisher to put out the flames prior to the arrival of the fire department and authorities.

The steering wheel had to be cut out in order to pull the woman from the vehicle.

Two tow trucks arrived to the scene at 4:45 p.m. to clear the bus and car from the road. Police, firefighters and tow workers spent around 20 minutes cleaning the street of debris and glass. 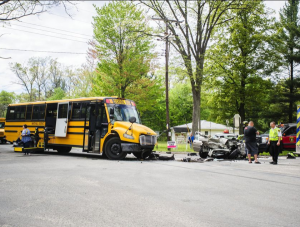